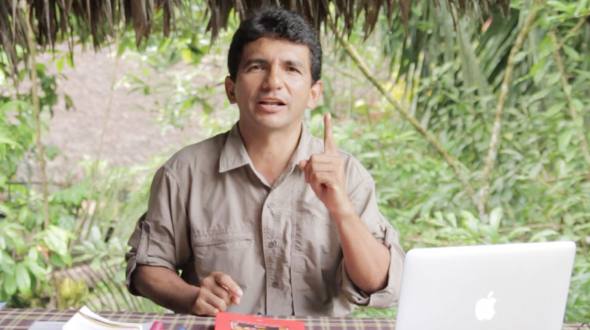 Clever Jimenez from the Sarayaku village.

From Sarayaku, the former Assemblyman Clever Jimenez (PK) said he feels free and announces that from there he will deal with corruption. “From here we’re setting up an audit office, from here, from Sarayaku in order to combat corruption.”

The aborigines of this Amanzonian land, known as Wio, have welcomed Jimenez, his advisor Fernando Villavicencio and physician Carlos Figueroa, sentenced to  prison for a trial that President Rafael Correa charged for them for libel.

According to the Assemblyman, who says he is still a legislator since he considers the judgement is void, the fact that he is staying in this community do not put it at risk because the Government must respect the autonomy and decision of the Sarayaku people. “If something does happen, it will be the government’s fault. The government knows that Sarayaku has precautionary measures, no military of police may enter here,” he said.

Jimenez came to the community a little over a month ago, a day before the arrest warrant was issued. The former Assemblyman ensures he does not feel like a fugitive.