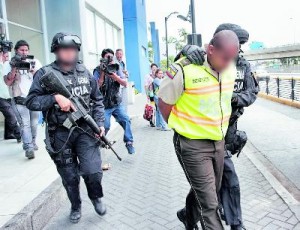 Cases of police officers who allegedy have been seduced by drug trafficking networks are increasing. The latest was resported yesterday in Guayaquil. During an operation two agents in active service were arrested for alleged links with drug shipping abroad.

The head of the Anti-Narcotics Unit, Marcos Zapata, reported that among those arrested there is an agent of the National Bureau of Crimes Against Life, Violent Deaths, Disappearances, Extortion and Kidnappings (Dinased), and also an officer serving at the Police Hospital, in the Zone 8.”

The arrest of the Dinased agent occurred at dawn when he was driving a black truck, property of the institution. In it he was carrying 133 packages of cocaine.

The vehicle, which had polarized windows, had been used in another operation hours earlier. However, at the moment of the police controls “it was found under the responsability of a policeman on active duty who was accompanied by another man,” Zapata said.

The head of the Antinarcotics Unit reported that the drug was going to be entered into a container in the port of Guayaquil, to be sent abroad under the blind hook modality.

The two detainees were transferred to the Flagrancy Unit in the north of the city. There, the Dinased agent confessed his participation in the illicit acts, but he also implicated another agent.

At 11:00, members of the Mobile Special Anti-Narcotics Group (GEMA) broke into the premises of the Police Hospital, a few meters from the Flagrancy Unit, and captured an officer working at the site.

Commander of Zone 8 Edison Gallardo indicated that the investigation could link more police officers. “We remain in the process. there is no flagrant hearing yet to determine how many people are going to be arrested for this case,” he said.

Alberto Acosta talks about the right to resistance

Ecuadorian exports of products to Spain declined a 24,6% in July