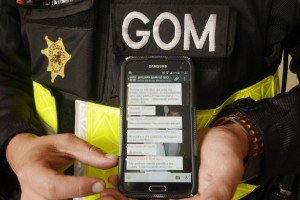 A group chat set up by the police and inhabitants of the Jipijapa sector, north of Quito, has helped to arrest several suspects. The former head of the Metropolitan Police District General Ramiro Mantilla, says that an unusual crime increase in the Jipijapa sector took place in January and they realized that the crime alerts came late to the police. Therefore they sought a solution.

Lieutenant Reyner Romero was the one who proposed the creation of  the Jipijapa Safe Neighborhood, which has four groups made up of 100 members each. “Thanks to the chat there is a more direct communication with the inhabitants of the sector and so far we have achieved the arrest of 25 people in flagrante delicto and registered more than 70 citizens who were acting suspiciously in the sector,” said Romero.

This police initiative was also applied with the runners of La Carolina Park, as theft complaints were recorded by the athletes of the park and surrounding areas. 40 people have been identified as suspects thanks to the help of athletes who send photos via chat.

Learn about the 10 happiest countries in the world

Yachay, the tip of the iceberg