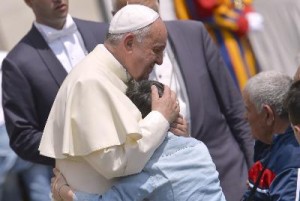 Yesterday, at the Pope General Audience, Pope Francis received the families of the victims of Condor Operation.

Jeremiah Levinao, was also received by the Pope. He was detained and tortured in Tamuco (Chile). As well as, Margarita Maino and María Paz Venturelli , sister and daughter of John Bosco Maino and Omar Venturelli , respectively, both missing and murdered in Chile.

The Condor Operation, led by former Chilean dictator Augusto Pinochet, had the purpose  to suppress political opposition in South America in the 1970s and 1980s.

Several attendees are immersed inthe Condor Process, that judges in Italy the disappearance and death of 23 Latin American citizens of Italian origin.

Pope Francis leaves an open door to talk about celibacy