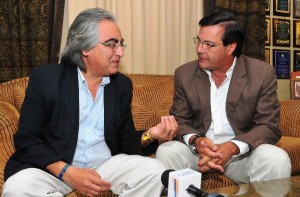 Prefectures are in conversations to manage their own constitutional amendment with the purpose of avoiding a “straitjacket” due to an eight-year limit for the creation of regions.

The President of the Consortium of Autonomous Provincial Governments of Ecuador (Congope for its Spanish acronym) and Prefect of Pichincha Gustavo Baroja, met yesterday with Jimmy Jairala, Prefect of Guayas.

Baroja said: “We have asked in the amendment to remove the straitjacket, to be allowed to discuss on the necessity or not of the regions, and we have asked the Prefect of Guayas to join us at the public hearing, so he could be another voice for the prefects in relation to the request for the amendment”.

The Congope President clarified that they are asking a deeper analysis of the issue, for “Assuming it with full responsibility and obviously after the discussions we will see whether or not the regions are needed in the country”, he added.

“The proposal of the Congope has the absolute support of Guayas and has the support of Congope. We’re In the same line and we agree with the proposals of Prefect Baroja”, Jairala said.

158 applicants are disqualified to replace new judges of the CNJ