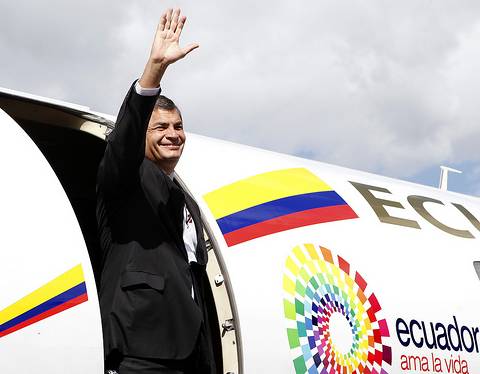 President Rafael Correa arrived to Brazil to start his agenda of activities including the meeting with the BRICS bloc (Brazil, Russia, India and China) and the visit to companies and projects in the South American country.

At the time, Correa is in the San Jose dos Campos Technology Park and Research Center on an intervention of the place premises.

It is expected that the president perform the signing of a mutual cooperation agreement between the entity and the Public Company Yachai.

As part of his agenda, he will also visit the Aeronautics Brazilian Company (Embraer), and have lunch with the former President of Brazil Luiz Inacio Lula da Silva.

While in the evening he will give a lecture at the University of Sao Paulo.

Correa’s visit will culminate on July 17 with the next meeting of the Community of Latin American and Caribbean States (CELAC), with China, Brazil and other South American countries.