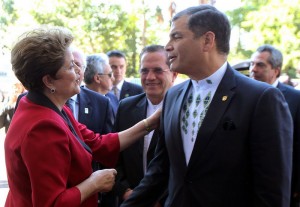 President Rafael Correa on Thursday ended his three-day tour in Brazil and rated this as successful.

In addition advances were concretized for Ecuador as other Asian cooperation in agriculture, technological development and expansion of scholarships to China, according to the Foreign Ministry. The Asian government announced 2,000 scholarships for Ecuadorians, and in 2016 it provides the journey of 1,000 CELAC leaders to China.

Correa also stressed the meeting with representatives of the member countries of CELAC and Brics, talks between the University of Sao Paulo and Yachay, and the cooperation agreement against child malnutrition.