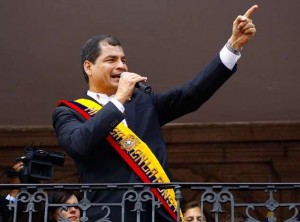 The Secretary of Government Communication reported that President Rafael Correa will attend this Thursday the takeover of the elected president of Costa Rica, Luis Guillermo Solis.

Solis, 56, will assume the position held by Laura Chinchilla, to govern the next four years, in a mass ceremony at the National Stadium, which will be attended in addition by Correa, the presidents of Bolivia, Guatemala, Honduras, Panama, Dominican Republic and prince Phillip of Bourbon.

`There is a great illusion. Now let´s work. We’re going to live a new story,´ said Solis on the eve of the inauguration ceremony, which will also be attended by thousands of citizens, including some 80 government delegations and organizations.

Correa also plans to give a lecture at the University of Costa Rica on Thursday afternoon.