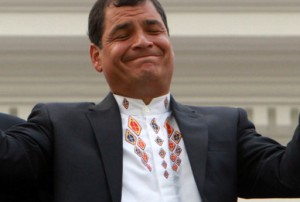 President Rafael Correa will take his annual holidays in the middle of this month, which will be extended for 15 days, so the National Address will be led by Vice President Jorge Glas.

Participating in the summit of the Community of Latin American and Caribbean States (CELAC), which will be held between 15 and 17 July in Brasilia (Brazil), are among his last scheduled activities as reported by the Government Palace.

In this context, Correa meets today with Ralph Gonsalves, Prime Minister of St. Vincent and the Grenadines, who is also a CELAC member.

For the appointment in Brazil It is also expected the assistance of Chinese President Xi Jinping.