BREAKING NEWS
54% of the local population access mobile connectivity
Students from 100 schools on the coast start virtual classes from this May 18, 2020
Approved change in payment of life pensions would reach Rafael Correa and Jorge Glas
In Manabí, 9 detainees, including Assemblyman Daniel Mendoza’s adviser
Ecuadorians finalists in competition in Mexico for digital entrepreneurship
Narcos use four new modalities; in quarantine the Police seized 3.7 tons of drugs
In Ecuador a drop of more than 50% of new car sales is expected
State budget with reduction in the face of the pandemic
Tourism in rural areas, a state commitment
Coronavirus crisis: Car sales plummeted 80% between March and April 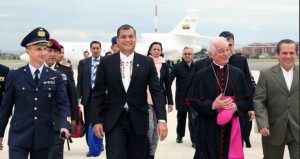 Today President Rafael Correa, along with Foreign Minister Ricardo Patiño, and the Vice President of the National Assembly, Marcela Aguinaga, will hold talks at the Vatican with Pope Francis. Francesco Canalini, apostolic nuncio of the Vatican Secretariat of State, received the presidential delegation, which arrived yesterday at the Ciampino airport.

Besides the interview scheduled for today, President Correa will participate in the workshop “Protect the Earth, Dignify humanity,” organized by the United Nations Sustainable Development Solutions Network, which addresses climate change and the dignity of the human being. “We arrived in Rome, more beautiful than ever, in the spring,” Correa wrote on his Twitter account.

Worldwide effort to help the victims of the earthquake in Nepal

Retirees will also be able to accumulate the annual bonuses