Pronobis will start in April to build Karibao 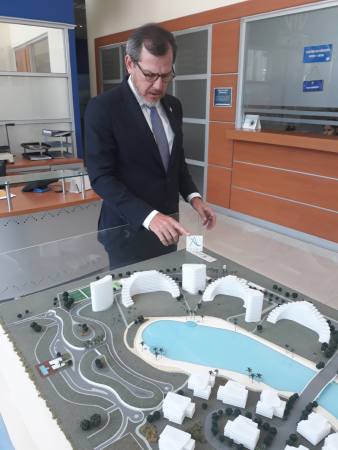 Karibao, a tourist town in Playas, will have 30 buildings. More than $ 700 million will cost Karibao city.

With an approximate investment of $ 300 million Pronobis will give the green light in April next to the construction of Karibao, whose name is attributed to the acronym “the Caribbean in Engabao”. An urbanization located in that commune (Guayas), which will have buildings of high, medium and low density, in a space of 51 hectares.

Andrés Casal, general manager of Pronobis, promoter of the work, tells that the idea of the project was born six years ago (2012) with an original projection of building only high density buildings with an investment of almost $ 700 million; however, on the way that project evolved.

“By having everything of high density (tall buildings) you would generate a community that was too heavy, which would probably lead us to what we did not want”. This is how Casal refers to Pronobis seeking a sustainable, sustainable and friendly development with the area, which they intend to leave for the most part unexplored.

Casal anticipates that in April Pronobis will declare the arrival at the equilibrium point of the project, which guarantees it financially, a key condition for the start of the works that will officially begin with the construction of Arawa, the first building that will have 16 apartments of 38 apartments .

The construction of the building will take 18 to 24 months and has an approximate investment of $ 33 million, says Casal. However, he mentions that weeks ago, with its own capital, Pronobis began to carry out works in an area of the project where single-family villas will be built, in 92 plots of 250 m² each. (I)

Feria de Durán, the most prominent asset of the first public auction of 2018