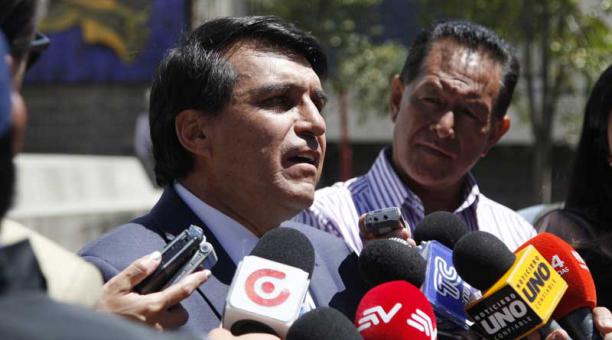 The Office of the Prosecutor received new versions of the investigation into the murder of General Jorge Gabela. It was close to 11:00 yesterday (Tuesday, June 26, 2018) when the former Secretary of the Ministry of Justice, Cecilia Carrera, entered the offices of the entity.

For an hour and a half, the ex-worker reported what she knew of the final report made by the expert Roberto Meza when he investigated the murder of the ex-commander of the FAE. That document is currently missing and the Office of the Prosecutor began an investigation.

Ramiro Román, lawyer of the Gabela family, was present at yesterday’s stage. He indicated that the former staff member would have been the person who received the final report from Meza. But this could not be corroborated with Carrera, because he did not speak after finalizing his version before the Prosecutor’s Office.

Personnel of the entity said that he left the offices by the back door. But according to Román, the former staff gave names of other people who made up the Interinstitutional Committee. In that list would be ex vice ministers of the Interior, ex ministers of Defense and officials of Justice.

For that reason, the lawyer of the Gabela family asked yesterday that the Prosecutor’s Office call to render versions to more officials of the three State Portfolios, especially to ex-officio ones, since it says that until now only the former Minister of Justice, Lenin Lara, has been summoned, who is currently mayor of Esmeraldas.

He must appear on Friday at 09:30 and like Carrera he will have to answer a series of questions regarding the final report detailing the causes for which the former military chief was murdered in 2010.

The family of Gabela, even asked that the former defense ministers, María Fernanda Espinosa and Fernando Cordero be summoned, in addition to the exits of Justicia, José Serrano and Ledy Zúñiga.

The lawyer of the latter was also present in yesterday’s version. Meanwhile, the Office of the Public Prosecutor still collects data related to the members of the Interinstitutional Committee who would have received the final report from expert Meza.

Among them are Zúñiga and five other ex-ministers. Until yesterday, the Office of the Prosecutor hoped that the Ministry of Justice would deliver the minutes of the meetings held by the Interinstitutional Committee.

For Román, these documents are important to know whether or not there was the final report of the expert Meza, who has assured that he did deliver it and that there it was said that the murder of Gabela was for organized crime. But the Prosecutor’s Office already made a formal request to Meza.

Through a notification form, he requested that he deliver the final report that was provided to the Interinstitutional Committee. Yesterday June 26, 2018, this newspaper communicated with Meza to know if he will deliver the report to the Prosecutor’s Office and said that he will not do it because he does not have a copy of it.

But he said he told the prosecution that he is available to reconstruct the report that was lost. Another request that the Prosecutor made to the expert was that he deliver a copy of the contract that was concluded between him and the Interinstitutional Committee. Yesterday two ex-employees of the Ministry of Justice had to appear, but they did not arrive at the proceedings. (I)