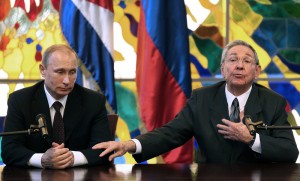 Russian President Vladimir Putin, and President Raul Castro, yesterday paid tribute to the dead Soviet soldiers on the island in the 60s and 70s.

Putin and Castro laid wreaths at the Soviet Internationalist Soldier mausoleum, cemetery where are buried the remains of 67 soldiers who died while serving in the island during the Cold War.

Cuba was the first stop of Putin tour in the Caribbean and Latin America. The Russian head of state arrives today to Argentina and tomorrow will be in Brazil, where he will remain until July 16 to attend the appointment of the “Emerging Economies”.

In an interview with Prensa Latina, Putin highlighted that they are interested “in creating full alliances, technological” with Latin America, in the oil and gas, hydropower and nuclear energy, aircraft construction and biopharmaceutical industries.

With Cuba “major projects in the field of industry and high technologies, energy, civil aviation, the peaceful use of outer space, medicine and biopharmaceutical are being studied”, concluded Putin.