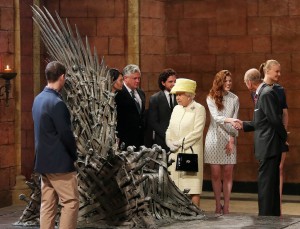 As part of their three days visit to neighboring Northern Ireland, Queen Elizabeth II and the Duke of Edinburgh visited the set of the popular HBO series, Pain Hall Studios in Belfast. The royal couple had the opportunity to chat with Maisie Williams and Sophie Turner, young actresses of the series who play Arya and Sansa Stark.

The choice of the ancient shipyards of the capital as the scenario for the famous series, which is an adaptation of the series “A Song of Ice and Fire” by writer George RR Martin has generated economic benefits for the region.

Paul McCartney will resume his tour `Out There!´