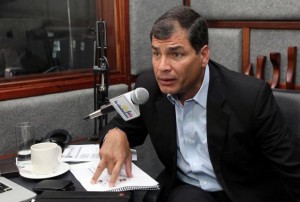 President Rafael Correa said Tuesday in a discussion panel with reporters five of the topics that would be included in the second package of amendments to the Constitution, he plans to send next year to the National Assembly.

A first change to the Constitution would allow the audit of secretaries with ministerial ranges and managers of agencies like the Ecuadorian Institute of Social Security (IESS), said the president.

It would also allow the Judicial Branch to be organized by regions. Thus, small towns would do not have Superior Courts.