Rafael Correa denounces the US intervention 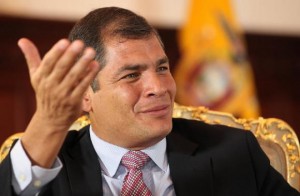 Rafael Correa, President of Ecuador, denounced the US intervention in Latin American governments.

During his speech at the Summit of the Americas in Panama, the president of Ecuador, Rafael Correa, criticized the US intervention in internal affairs of his country and other Latin American countries.

“Illegal interventionism still continue,” were the words of Correa against the US government, and denounced the Organization of American States (OAS).

“Our people will never accept the guardianship, interference or intervention,” said the Ecuadorian President on Washinton policies for the “democratization” of the South American countries.