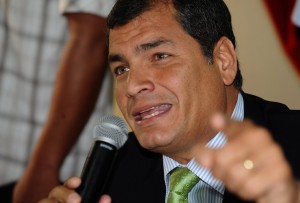 On Thursday, President Rafael Correa expressed his political differences with Ramiro Gonzalez, leader of the Avanza political party, and who resigned to his charge as Minister of Industries and productivity by disagreeing with the new law for Labor Justice which eliminates the 40% state contribution.

As “a patchwork quilt” Correa described the Avanza party, as he ensures that its members were part of other political movements before, and are related to IESS people, he said without mentioning names. Correa also said that the sustainability of IESS is 23 years rather than 12 years, as Gonzalez states, and who before his resignation ratified the debt the state has with the Social Security.

Vatican Mission will arrive to Ecuador in May