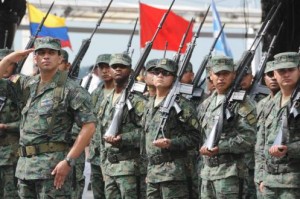 Three reforms to the Law of Armed Forces Staff (FFAA for its Spanish acronym) will be discussed this December 22 in the second and final debate in the plenary of the National Assembly.

The Commission on Sovereignty and International Relations proposes that the military rank and classification, as well as the availability, will be granted to officers through ministerial agreements; and enlisted personnel by their respectivecommander general.

With the current rules, promotion and availability are determined by the president by executive decree.

The designation of aides-de-camp for high State authorities will also be amended.