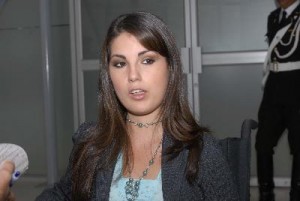 The Assemblyman for Guayas by the PSC, Maria Cristina Kronfle, reported that she was disrespected by the crew of the LAN company by not receiving assistance for her mobilization.

“Her rights were disrespected as a disabled person in the XL 1523 flight, covering the Quito-Guayaquil route. Upon landing, and once all the passengers disembarked, as well the flight crew, she remained inside the plane with the cleaning staff. They told her she had to take her chair back from the baggage band, a chair that was delivered in perfect condition in Quito at the aircraft door, to be received in the same conditions in the destination city, which did not happen that way, since it was not in its place and with a malfunction in one of its tires,” said the Assemblywoman in a statement.

“Given this situation and considering that the infringement of a right has a serious implication and they do not consider trascendent what happened, either things shows that it is essential that someone mediate in this situation, a reason why the complaint was raised in the Ombudsman´s office , which called the two parties to a public hearing.” The appointment is today in Guayaquil and was scheduled to start at 11:00.

Bus from Yasunidos will advance to Aguas Verdes