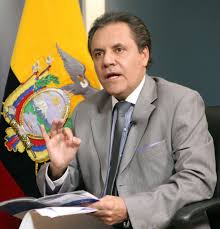 Carlos Ochoa, Superintendent of Information and Communication, after a year of the creation of the entity, said in an interview with El Universo Newspaper, that the proposal for reforms to the Organic Law of Communication (LOC) would be based on three principles: progressivity, proportionality and balance.

“Progressivity, which is about the recurrence of faults, ie, the greater number of offenses, the greater the reaction of the state through the law; proportionality, so that there is a proportional response to the committed offense; and balance, as to serve in a balanced way the interests of citizens, of the regulated and of the state,” the authority said.

Ochoa also clarified that the LOC “is to ensure the communication rights of 15 million of Ecuadorians. Nobody seeks to control the media or its closure, what is being expected is that they work with good quality and professionalism, but above all, with responsibility.”

The Superintendent highlighted the progress that has been made after the creation of this law and said that the media today is more careful when publishing wrong news and if they make a mistake, they have the right to reply.

National Assembly, along with CJ and CNJ will decide the deadline for the implementation of the Code of Processes