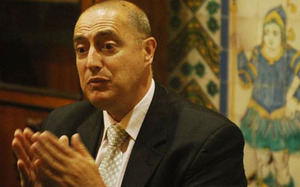 The Ecuadorian regime described as personal statements recently made ​​by the U.S. ambassador, Adam Namm, who said that the image of the country is affected by its ties with Iran and Belarus.

“The Ecuadorian government takes the statements of Mr. Adam Namm as personal statements from him,” said Deputy Foreign Minister Marco Albuja to the public channel ECTV.

The regime spokesman added that the ambassador’s comments “are not the arguments used by the U.S. government” and neither of “the State Department, who has repeatedly expressed a desire for not only a commercial approach but also diplomatic-political with Ecuador.”

Namm said recently in a meeting of the Ecuadorian American Chamber of Commerce and various actions of the national government affect the way the world sees Ecuador and quoted some facts as to host leaders of marginalized countries such as Iran and Belarus; granting asylum to Julian Assange, the 40 million judgment against the newspaper El Universo, and the boycott of President Rafael Correa at the 2012 Summit of the Americas.