Rolando Panchana took over as Governor of Guayas 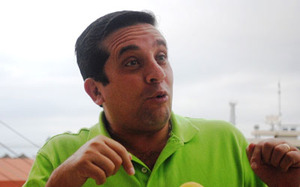 During yesterday afternoon, Rolando Panchana took office as governor of Guayas, after Viviana Bonilla resigned her position to participate as a candidate for mayor of the regime of Guayaquil. Panchana presented his work axes and lines of action in which his administration is based.

During his first speech Panchana talked about the three axes that will be the basis of his administration: fight crime, promote mobility and encourage solidarity in the province.

Regarding the crime in the city he said that there is still “much to do,” at the same time he stated that he will not hesitate to ask for the support of the Armed Forces, the National Police and local governments to work together and “give no quarrel to crime.”

Panchana stressed that his actions will be highlighted by service and said that “the governor will visit anywhere in the province of Guayas, at any time that I please.”