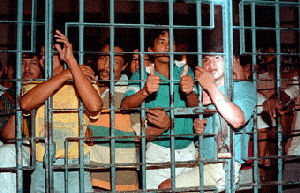 Convicts failed to escape from the Nº 2 Social Rehab Center in Guayaquil. Nearly 80 members of the police and military are guarding “La Roca” correctional institution. Two penitentiary guides were wounded, a pair of holes of 2 meters each were made last night with an explosion in one of the rear walls of the rehab center perimeter.

The shrapnel and the expansive wave hurt two policemen. Angel Robalino, a sub lieutenant who is in charge of a maximum-security jail located near the state prison. The Criminalist department did the respective analysis this morning and its report is expected in order to know the explosion details.

Authors of the detonation remain anonymous. This morning the Especial Operations Group (GOE) trucks arrived along with the bomb squad and police patrol units at the crime scene, as well as a tank riots.