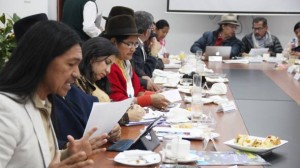 Public officials, Assemblyman of the Government and leaders of the Cayambe county (Pichincha) and the Confederation of Peasant Organizations (Fenocin) took part in the first meeting for the creation of the Indigenous Alliance for Citizen Revolution.

The goal of the alliance, as explained, is to bring together the foundations of the indigenous sector and establish an agenda to strengthen the multinational state, as the Constitution mandates.

President Rafael Correa has referred that the measure was taken because CONAIE maintained a “political use” of the property and not an organizational purpose for which it was granted more than two decades.