Rumor about alleged support removal from the military to the Government 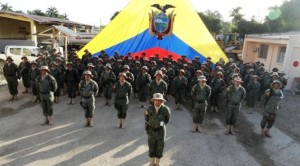 The defense minister, Fernando Cordero, and the Chief of the Joint Command of the Armed Forces, Luis Garzón, yet again denied the rumors about the withdrawal of support to the government by the armed forces, which would become effective after the Pope leaves the country.

There are two voice messages circulating through the the popular messaging application WhatsApp. In one of them a woman is heard warning that after the visit of Pope Francis there will be a bank holiday, and because of that she warns people to massively withdraw their savings from banks. While in the other a man claims that at 16:00 Sunday the military withdrew their support to the Head of State.

Cordero assured that the statements come from “rented broadcasters,” who are foreigners.

Quito march ended in brawls between the police and demonstrators

More than 100 Ecuadorians live in Athens, according to the consulate