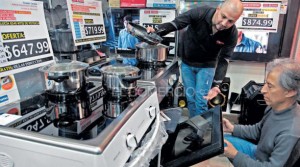 Sales of induction cookers of domestic production began to fall sharply during the last two months, for both manufacturers and retailers.

This is attributed to the announcement of the government of importing Chinese induction cookers not only to be delivered freely to the beneficiaries of the Human Development Bond but for retail sale at lower prices.

The cheapest model of national cookers marketed costs $ 595 (four-burner stove with oven), while the Chinese model offered by the Government will be around $ 300.

According to data from the Association of Industrial Appliances, between September 2014 and July of this year, domestic manufacturers have sold 177,472 induction cookers in the program carried forward by the Ministry of Electricity.

The president of the association, Javier Mora, states that the production capacity of domestic industry is in the order of 125 000 units per month. He details that until last June, sales of remaining units came with a certain dynamism and upward trend. Moreover, compared to 2014, sales of induction cookers grew 241%.
Source: http://www.elcomercio.com/actualidad/ecuador-venta-cocinasdeinduccion-demanda-gobierno.html