Samoa and New Zealand welcomed the 2014 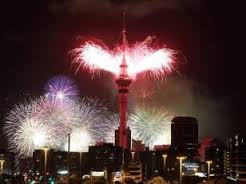 The first inhabitants of the planet to say  goodbye to 2013 and welcome 2014 have been those of Samoa, Kiritibati (Kiribati) and Tokelau (New Zealand), in the South Pacific.

About 180.000 inhabitants of the island nation of Samoa received the new year at 10:00 GMT (05:00 from Ecuador), as the population of Kiritibati, and that of Tokelau, New Zealand.

At 13:00 GMT (08:00 from Ecuador), thousands of people gathered at the events organized in the emblematic Opera House of Sydney, in Australia.

On the other hand, the traditional fireworks on Sydney Harbour were affected by the rain that fell in the afternoon, but the weather service said that it is an occasional rainfall, according to the Australian radio ABC.

The Australian authorities estimate that at least one million and a half people will leave the port of Sydney to watch the traditional Fireworks which on this occasion, which will be fired from the roof of the opera house.