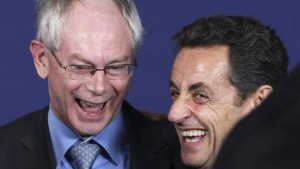 The French president, Nicolas Sarkozy will deliver the president of the European Union Council, Herman van Rompuy, a report were he proposes to create a European Treasury. This entity would begin with countries with the least amount of deficit, starting with France and Germany would expand on the States that respect the 3% limit of the deficit imposed by the Pact of Stability and Growth. Two French officials created the document, which contains 16 proposals to improve the economic policies of Europe.

“We propose to consider the medium term to create a entity that handles the coordinated management of the debt of the Eurozone countries, this is the logic move to step of the creation of their unique currency.” Added the text. For this plan to work the French government must convince the Germans that they have the capability to maintain the public deficit under control.