School Ship Guayas was the seat of Assembly commission 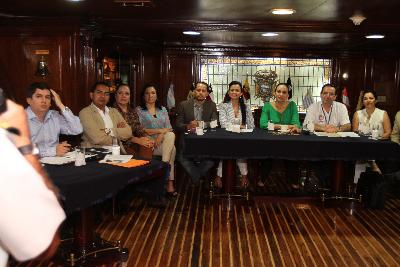 The BAE Guayas School Vessel of the National Navy, today, for a few hours was the seat of the Legislative Power, since for the first time there oficially met a commission of the National Assembly.

More than eleven assembly members, including the President of the Assembly Gabriela Rivadeneira, were at the meeting of the Commission for Economic Development, Production and Microenterprise, headed by Legislator of Guayas Juan Carlos Cassinelli,of the political movement Alliance PAÍS.

After two hours of dissertation and concerns resolved by Soledad Barrera, representative of the National Finance Corporation (CFN for its Spanish acronym), the members of the Assembly eventually ended the session. After this, the souvenir photos followed. The Legislators received a pin insignia from BAE Guayas. Then, they took a boat and sailed through the Guayas River to the Santay island, whrere they had lunch with the community and toured the trails.