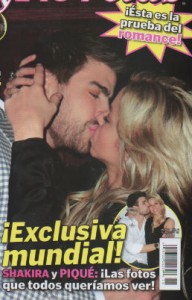 Rumors about the relationship between the Colombian singer Shakira and Spanish footballer Gerard Pique were confirmed after the publication of some photos in the latest edition of Caras’ magazine in Colombia, in which they show themselves deeply in love in the middle of a kiss.

The editorial director of Caras’ magazine, which circulates in Colombia, Peru and Ecuador, did not disclose the amount paid for purchasing the package of 15 photos, after offering dozens of photographer’s have different combos. In this fortnight circulation, the magazine decided to launch a special edition printed 260,000 copies, twice the usual.

Several journalists covered an advertising presentation in Madrid where Piqué was present. When they asked him about the photos, he answers about his fellow Iker Casillas and girlfriend Sara Carbonero passionate kiss. After that, he confessed he has not yet seen the photos with the singer, but when one of the journalists showed him the magazine he said laughingly: “It’s a nice kiss.”

“I don’t know if this is the happiest year of my life, but right now I am living a beautiful moment. I’m in love too, and I hope that all goes well, “said Pique, according to data published by El Pais.

The images were captured during the birthday celebration of the couple as they meet the same day. Shakira photographed not only with players like Lionel Messi and Carles Puyol, but also had the opportunity to pose for the camera lens in the parent company of Gerard.