Slowdown in the banana sector 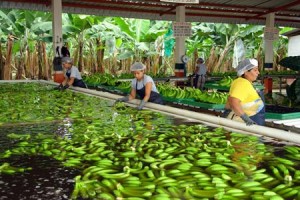 Data from January to October, of the Association of Banana Exporters (AEBE) indicate that Ecuador sold 264.9 million boxes to the world, compared with 246.1 million in 2014 and 209.8 million boxes in 2013.

That is, in the first ten months of 2015 foreign sales increased by 7.6% over the previous year, ten percentage points less than what it had grown between 2013 and 2014.

Russia, the Mediterranean (the fruit is mainly exported to Italy) and Eastern European markets are the most affected, with a drop of between 1.63 and 27.93%, according to statistics of the AEBE.

Nevertheless, the industry has good prospects in the long term. Sergio Murillo, Director of Operations of Dole, the largest exporter of Ecuador, which sells the 9.80% of the national fruit, ie 25’957.741 boxes (October 2015), assures this to Daily Expreso.

Ecuadorian banana does not go through good times (international prices dropped), but it would recover during the first four months of the year, which is considered high season.
Source: http://expreso.ec/expreso/plantillas/nota.aspx?idart=8749854&idcat=38229&tipo=2