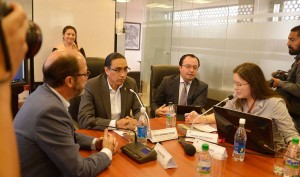 The fall in oil prices is the main factor that has influenced the drop in deposits in the financial system, reported yesterday the Superintendent of Banks, Christian Cruz.

According to the Central Bank of Ecuador, deposits recorded a drop of $ 3.191 million between December 31 last year when $ 32,727.98 million were deposited in the financial sector compared to $ 29,536.86 million recorded in November 30.

In an appearance before the Assembly, Cruz said that while there this a drop in deposits due to a drop in liquidity, this has not affected the solvency of banks. He said that this index was 13.29% in November 2014 and 13.79% now.

The superintendent said that despite the external shock the banking sector remains strong. He explained that due to the drop in oil prices $ 7,000 million have ceased to enter to the economy.

According to former Finance Minister Fausto Ortiz this decrease in deposits is logical since as a result of falling oil prices, public works has been reduced and this means less payments to contractors and therefore less deposits. He explained that in November 2014 public works represented $ 10,000 million, while in November 2015 $ 7,000 million.