Still no results are seen after proposed peace plan for Ukraine 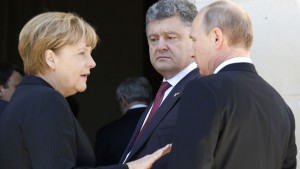 Western countries requested the President of Russia, Vladimir Putin, “acts” to achieve peace in Ukraine and urged Kiev to take “the necessary decisions.”

Ukrainian President, Petro Poroshenko showed passports of Russian soldiers who entered Ukrainian territory during the Munich Security Conference (in southern Germany), when US Vice President Joe Biden, had called just before the Russian head of state to show with “actions, not words” who is willing to stop the armed conflict.

“Too many times President Putin has promised peace, and delivered tanks, troops and weapons,” he reiterated in Munich.

Meanwhile, German Chancellor Angela Merkel said: “It is not certain for this negotiation to be successful (…) but I share with President François Hollande it is worth to try.