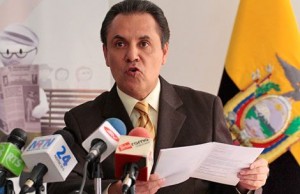 Yesterday was held the audience of the Superintendent of Communication (Supercom) in a new case against the Guayaquil newspaper Extra.

The process was initiated for the non-compliante of ethical standards on morbid treatment of the information. The complaint relates to the articles: “Land of Death” and “Neither the helmet withstood the potato strike.” The first, on the accident of a Malaysia Airlines plane and the second on a traffic accident in the area of ??the Town Committee, in northern Quito.

The Supercom conducted a technical report with semiotic analysis of international experts on the treatment of information.

Alejandro Salguero, of the Supercom, said that using exclamation marks in the title calls the attention of the reader as a traffic signal and said that the first headline is imprecise because Ukraine, where the plane crashed, is not a land of death legally speaking.

The defense of Extra newspaper, in charge of Johny de la Pared, questioned the legitimacy of the report because it cites experts that would not have been consulted specifically on the articles issued.

The hearing was suspended after an hour, because the defense requested three certified papers elaborated by the Supercomto be entered as evidence.