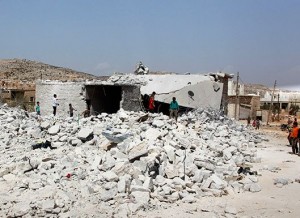 The United States through a statement on Wednesday showed “appalled” by reports, according to which, the Syrian government launched bombs on a refugees camp in the Idlib province (northwest).

“We are appalled at the information about the attack and the images of the carnage against innocent civilians,” said the State Department spokeswoman, Jen Psaki.

She said that although “we can not confirm the details, we again condemn the disrespect of the regime of Bashar al-Assad for human life, especially its violence against civilians.”

The Syrian Observatory for Human Rights reported that ten people were killed and dozens of them were seriously injured in a helicopter attack that launched explosive barrels.

“This attack was nothing less than barbaric. Unfortunately, if confirmed it was the work of the regime, it would just be its latest act of brutality against its own people,” said Psaki.