SuperCom refers file of the “Bonil” case to the Prosecution 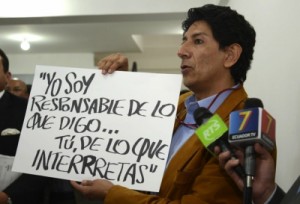 The Superintendency of Communication (SuperCom) forwarded on February 26 to the Prosecution certified copies of the administrative record that formed the basis for the sanction it imposed on El Universo daily and cartoonist Xavier Bonilla (Bonil).

The decision was made under Section 64 of the Communications Law, which lists the administrative measures for the dissemination of discriminatory content. Its last clause states: “The Superintendency shall send to the Prosecution, for the investigation of an alleged crime, certified copies of the file that served as the basis for imposing the administrative measure on acts of discrimination.”

The penalty for the director of the media was to issue a public apology in the print and online version of the newspaper, and for the cartoonist,a written reprimand so he improves “his communication practices.” So they did.