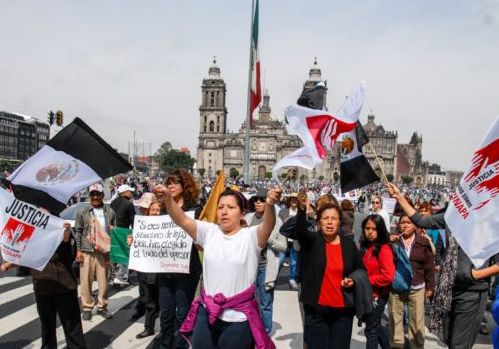 Some 2,500 people turned out to the streets of Mexico City on Thursday after five months of the disappearance of the 43 Ayotzinapa students (Guerrero, south), in a day of protests that extended to the tourist city Acapulco.

“The inability of the President of Mexico remains proven by not being able to solve the problems of his country,” since after five months of this crime that shook the country and the international community he has failed to “fulfill his promise” to clarify the case, told reporters Felipe de la Cruz, spokesman for the families of the victims.

The protest began at the iconic Angel of Independence towards the residence of President Enrique Peña Nieto and so far there has been “no major incident,” reported to Radio Formula Hector Serrano, Secretary of Government of the Mayor.

“We feel helpless by our compas (comrades),” said Cesar Antonio Pérez, a doctoral student, while participating in this new march for the crime with unionized university teachers in the capital.

The crime of Iguala triggered unprecedented protests in the country and claims from the outside like the US or the UN.