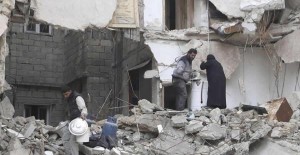 At least 19 civilians, including a mother and her three children, died after being hit by a shell launched by the rebels on neighborhoods loyal to the regime in Aleppo, in northern Syria, an NGO said yesterday.

The victims, among which were five children and three women, were killed on Thursday in several neighborhoods on west Aleppo. 32 others were injured, according to the Syrian Observatory for Human Rights (OSDH for its Spanish acronym).

Aleppo is divided since July 2012 into two zones: the loyal sector to Bashar al-Assad regime in the west and the rebel sector in the east. Since October, the rebels are almost completely besieged by the Syrian army that wants to cut their supply line.