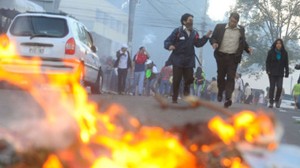 After 4 years, the 30-S Commission will finally deliver on Monday to the Attorney General, Galo Chiriboga, the results of the investigation on the police uprising and attempted coup d´état of September 30, 2010.

According to the Commission,  a “soft coup d´état” was attempted to carry out, which was planned and held a series of meetings in Quito between military assets and liabilities.

The Commission indicates that 30-S attempted to perform a soft coup, which, according to the final report of the entity, was planned and held a series of meetings in Quito, and out of that city, between military assets and liabilities.

The report also detailed there are indications that the lootings in Guayaquil were planned and organized by leaders of the invasions. “the Assembly requested amnesty at the moment a criminal offense in progress was being developed”, said Carlos Baca, who is in charge of the comission.

He also confirmed that the safety of President Correa was fragmented in the rescue.

Report on YASunidos’ challenge is ready