The air channels negotiate the transmission of the national championship 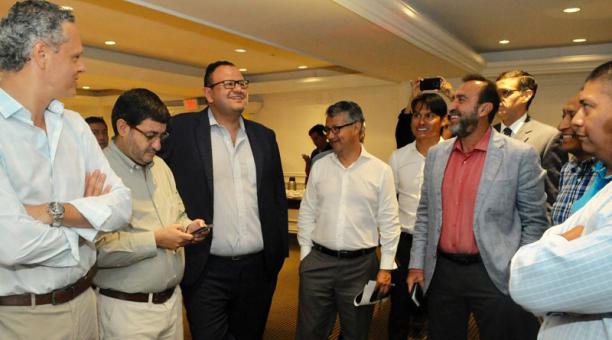 The presidents of professional clubs, meeting in Guayaquil today (February 15, 2018), asked the Ecuadorian Soccer Federation (FEF) that two games of the first date of the national championship be broadcast on open-signal television and the other four by coded TV signal.

“Now everything is in the hands of the Federation” said the leader of Liga de Quito, Esteban Paz. Alfredo Cuentas, director of the Barcelona Sporting Club, gave more details about the request made to the FEF after the meeting held in Guayaquil.

Who will broadcast the matches? “I understand that it will be CNT (National Telecommunications Corporation) that transmits. The channels of open signal understand that there is proposal of RTS and Teleamazonas “, explained the bullfighter manager. This newspaper contacted Sebastian Corral, manager of Teleamazonas, to know his version.

According to Corral “he could not affirm nor deny” the possibility of transmitting. However, he acknowledged and said that “we are in negotiations”. What does it depend on? “Up there no more. If we reach the agreement, we will announce it in a timely manner, “said Corral. However, the channel has already made public a promotional video of the match between Barcelona and Universidad Católica tonight, Thursday, February 15. For now, it is not known which games will be broadcast from the first date of the championship and which operators will do so. CNT announced that it has everything ready for the transmissions from the first date of the championship.

Ecuadorian soccer stopped being transmitted by open signal since last year and at the end of 2016. The channels seized GamaTV and TC Mi Canal sold the rights to cable operators due to economic problems. In 2017, only three dates were broadcast by open signal and the rest of the tournament could only be watched by DirecTV, TVCable and CNT.

In the afternoon of Thursday, February 15, 2018, the representatives of the 12 clubs of Serie A, with the support of the 12 of B, reiterated to the media their support for the contract between the Ecuadorian Soccer Federation (FEF) and the company GolTV, and requested that the first date be broadcast on television.

Tito Manjarrez, president of El Nacional, was the spokesman who read the manifesto signed by the teams before journalists at a hotel in Guayaquil. In a written statement to the president of the FEF, Carlos Villacís, indicated: “The 24 clubs are writing to you to confirm our support for the contract between the FEF and the company GolTV.” Then, the directors added that “in order that the Ecuadorian fans are not deprived of being able to watch the matches on television, while the judicial authorities resolve the processes submitted to them, we request that you manage, transmit all the games of the Series A and at least two of them, are broadcast on an open television signal. “The first date will be played between Friday 16 and Monday 19 February 2018, but there is uncertainty about whether fans can see the matches on television. GolTV has a contract signed with the FEF for 10 years, but this was frozen by a court order. (I)