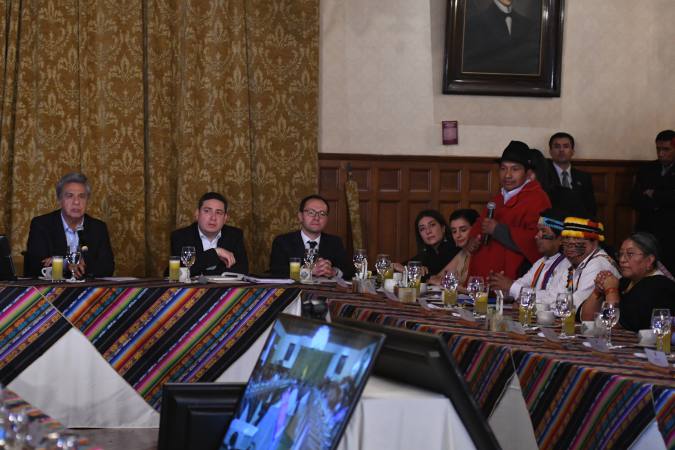 Seven years passed before the leaders of the Confederation of Indigenous Nationalities of Ecuador (Conaie) re-entered the Presidency to present their proposals, although they were not totally satisfied.

In October 2009, under the leadership of Marlon Santi, it was the last time the Conaie had contact with the Government. Rafael Correa was president then.

Yesterday, some 60 indigenous leaders returned to the Banquet Hall; Among them, the Ecuarunari President Carlos Pérez Guartambel and the current Conaie leader Jorge Herrera, who handed over to President Lenin Moreno their urgent plan for the implementation of a five-axis Plurinational and Intercultural State, taking advantage of the call to a National Dialogue.

Perez Guartambel was incredulous, and said that they had “clear, ambiguous, generic” answers.
“We are giving the government an opportunity to analyze. We want our territories back, not eviction; We want a moratorium on extractivism and negotiation is not an option. I see this dialogue is quite complex, it is very difficult, because we are not going to make do with candies,” Perez said. (I)

The management of “electronic money” in the country

Friction between Lenin Moreno and Rafael Correa for dialogue, the Odebrecht case, and other issues