The head of the Army resigns over an espionage scandal 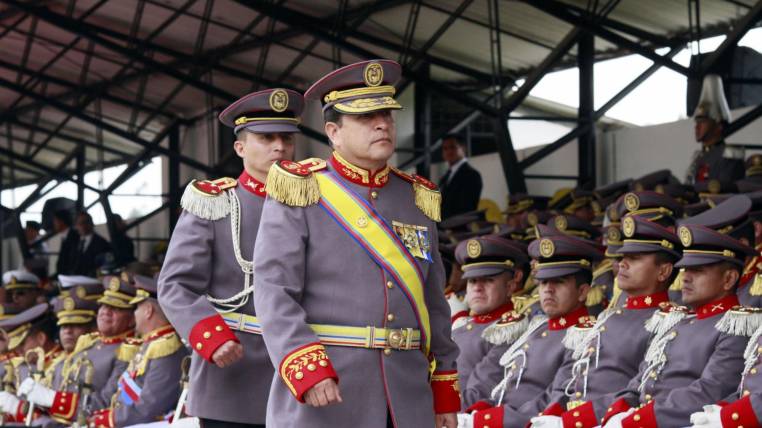 General Édison Narváez Rosero presented President Lenín Moreno with his availability to the position of general commander of the Army, pressured by the scandal of espionage between commanders of the military leadership.

His resignation to the functions that he carried out since March of 2017 forces a change of command in the Army, on which rests the greater responsibility for the control of the northern border, in which he has 7,000 troops distributed among the provinces of Esmeraldas, Carchi and Sucumbíos, among them the Special Forces.

The new commander will be chosen by the chief of the list presented by the Minister of Defense, General Oswaldo Jarrin, which will be composed of the following senior generals: Roque Moreira, Roberto Rubio, Division and Jaime Castillo Arias, of Brigade.

Narvaez, who yesterday did not want to indicate the reasons for his departure, had asked the then Minister of Defense, Patricio Pazmiño, last month to give him time to show that he was innocent of the espionage accusations against the chief of the Joint Command of the Forces. Armed, Lieutenant General César Merizalde.

According to this newspaper, Military Intelligence is investigating the irregular activities that were done from an office in Quito, which provoked a scandal of proportions in the military ranks at the time of the narco-terrorist attacks, the kidnapping and subsequent murder of three members of a journalistic team of the newspaper El Comercio, of those that have not yet been recovered, and the plagiarism of a couple of boyfriends, of whom there is no news.

With the designation of Jarrin as defense minister, Nárvaez was forced to resign his duties and thereby end a 36-year military career, in which he held, among other positions, the communication director of the Ministry of Defense and of the Joint Command, commander of the Fourth Army Division “Amazonas” and undersecretary of Defense.

The resignation of Narváez circulated fears of more changes in the military leadership, at a time when Minister Oswaldo Jarrín is looking at his actions with a magnifying glass, especially those related to decision-making for the protection of the northern border, in the that urgent changes have been requested in the way of operating and doing Intelligence.

The rumors that a group of Army agents worked in a secret office, scrutinizing the life of an Air Force general, began to circulate in the Armed Forces between March and April, until a Military Intelligence team was integrated to investigate it

According to this newspaper, the suspicion of espionage provoked friction and enmity between Merizalde and Narváez, which affected the cohesion of the command at a time of border crisis for the country, by the threats of narco-terrorists such as the Oliver Sinisterra front, composed of dissidents of the FARC and led the Ecuadorian Walter Patricio Arizala Vernaza, alias Guacho. This group is credited with the ten narco-terrorist attacks in San Lorenzo and the kidnapping of five people. (I)