The Mexican airline Interjet inaugurated on Tuesday October 1, 2019 a new route between Mexico and Ecuador that will currently have seven weekly frequencies, the Ecuadorian Foreign Ministry said in a statement.

The Mexican airline made its inaugural flight on the Mexico City – Guayaquil route, which gives Ecuadorians a new option to travel to North America. 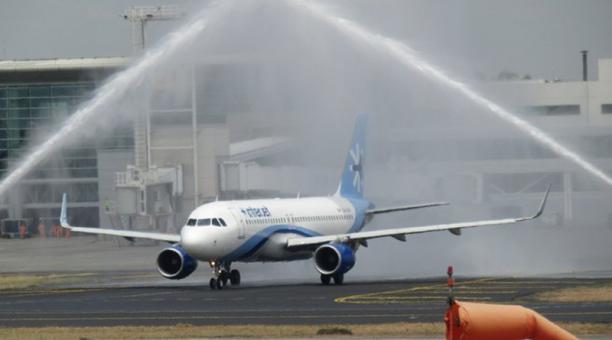 The ship arrived in Guayaquil at 10:00 local time (15:00 GMT), where it was received with the traditional water arch.

Ecuador’s ambassador to Mexico, Enrique Ponce de León, was traveling on the plane, as well as experts and Mexican authorities from the tourism sector who will hold work meetings in order to strengthen cooperation ties between both countries in tourism.

The company also announced a direct route between Guayaquil and the Cancun resort and plans to establish, as of October 29, a third direct to Quito, both on a daily basis.

These 21 weekly frequencies between Mexico and Ecuador add up to 12 currently operated by Aeromexico, which together represent a total of 33 flights a week between the two countries.

Interjet’s entry into Ecuador is a product of the “open skies” policy promoted by President Lenín Moreno at the end of 2017, which led to the entry of at least eight airlines into the country and the introduction of new frequencies between which They operated.

Among the companies that enhance Ecuador’s connectivity with other countries in the world since last year are Air France, Air Europa, Plus Ultra, Spirit, Gol, Jet Blue and Condor.

Saudi Arabia minimizes the consequences of Ecuador’s withdrawal from OPEC