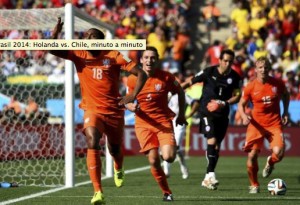 The Netherlands team defeated 2-0 this Monday to its similar Chile at the Arena Corinthians Stadium, in Sao Paulo, and finished in first place in Group B.

The goals came in the second half to Holland, when in the 76th minute following a corner, Leroy Fer scored with a strong head shot that could not be saved by goalkeeper Claudio Bravo.

The second came from a move generated by Robben who threw back a cross ball that pushed Depay at minute 90.

This result qualified Holland for the second round, while Chile, also classified, will face numeber one of the group A, probably the local Brazil.