The number of Ecuadorians who supports the referendum for the reelection increases, according to Cedatos 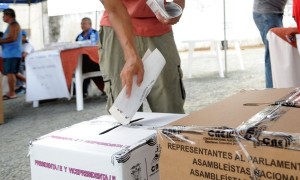 According to the survey conducted by Cedatos on indefinite reelection, the trends on Alianza Pais intention of carrying it out via amendment are increasing.

Cedatos indicates that according to the survey, 73% of the population believes that a referendum should determine whether or not to establish indefinite reelection in the country, while a 9% support the National Assembly to make the decision.

This survey is conducted by Cedatos monthly in 23 cities to 2 600 people aged 16 and older.

Cedatos also asked whether they would vote for Rafael Correa if approved the re-election amendment. The results gave that a 38% would vote for the current president, a 53% said they would not and 10% did not know or did not respond.

67 applicants seek to join the CNE