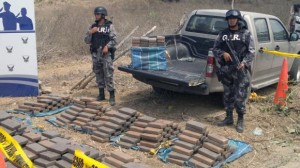 Police of Ecuador disrupts the “most dangerous” drug trafficking network the country ‘in the ‘Operation Pacific’.

Police of Ecuador gives another blow in its fight against drugs. This time it managed to disrupt the “most dangerous drug network of the country.”

The band sent from Manta, Guayaquil, Muisne, Portoviejo, Pedernales and Salinas, ” about 400 kilos of drugs to Guatemala and Panama weekly,”with Mexico and the United States as final destinations.

The Ministry of Interior and the National Police announced on Monday the dismantling of the band, in an operation called “Operation Pacific,” which could capture in early morning hours ten of its members -all Ecuadorians- includingthe presumably leader of the band, identified as Celso M., said the Interior Minister Jose Serrano.

During the raid, the police seized a building in Guayaquil, 17 in Manta, one in Santa Elena, a yacht in the port of Manta, documents of shipments and arrivals coordinates of drug, which seems to suggest links with Mexico.

According to Serrano, this band would be responsible for 5 to 6 violent deaths in Manabi.
So far this year, about 45 tons of drugs have been seized and the Minister anticipates that in 2014 last year’s figure of 57.43 tons will be surpassed.