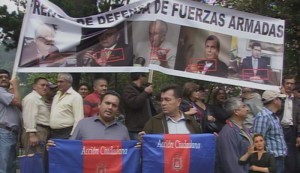 The Passive Service Military Federation “Huancavilca” asked president Rafael Correa openly to check again his decision to debit 41 millon dollars from the accounts of the Social Security Institute of the Armed Forces because of the alleged overpayment when buying lands in Samanes.

The guild, that gathers retired soldiers from the Coast, held a meeting yesterday in Guayaquil. Sergio Figueroa, member of the Federation, said that it was possible that today they will participate in protests depending on the decision of the other passive soldiers around the contry. Until yesterday 17:00, there were still guilds that had to take a position.