The Tungurahua volcano reactives with several explosions and ash emissions 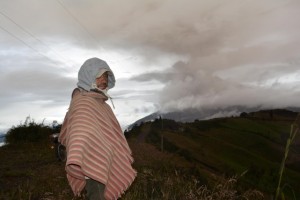 The Tungurahua roars again and puts at risk a vast population living on its slopes.

“The volcano makes us run again. We have to see if the activity will last long enough to transfer the animals or just clean up the grass,” said Oliverio Medina, a resident of El Mirador, in El Santuario sector, in the upper area of Quero, Tungurahua county.

Oliverio lamented that yesterday at noon ashes began to fall again. The reactivation was reported at about 11:00 with several earthquakes and then the expulsion of ash that reached seven kilometers high, according to experts of the Guadalupe Observatory (OVT). (I)

They came from the moorland to protest against low milk prices Small farmers say they are not paid the official value of $ 0.45