Third round of negotiations between European Union and Ecuador culminates 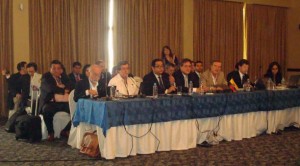 Today ends the third round of negotiations between Ecuador and the European Union (EU) in Brussels to reach a trade agreement.

On Wednesday, the EU considered as “very ambitious” to seal a trade agreement with Ecuador this week since “important issues” still have to be discussed on the table, said John Clancy, spokesman for the EU Trade Commissioner Karel Du Gucht.

President Rafael Correa said on Tuesday he expects Ecuador to sign the trade agreement with the EU “this year” because in December the country would lose the tariff preferences.

Mobile operators shall evolve from 3G to 4G until July 1