Three years in prison were ratified for Fidel Araujo 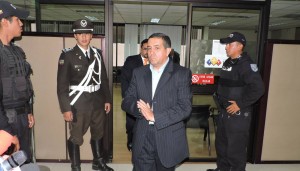 Yesterday, a court of the Criminal Division of the National Court of Justice (CNJ) confirmed the sentence of three years in prison for the Army Major Fidel Araujo Lopez, for his role as instigator in the police revolt of September 30, 2010.

The CNJ rejected the extraordinary appeal of cassation filed by Reinaldo Zambrano, lawyer of Araujo. He also rejected the implementation of the principle of favorability, considering that this crime did not disappear in the Comprehensive Organic Penal Code (COIP).

The hearing, that was reserved, lasted about two hours and it took four judges to ratify the prison sentence issued by the Fifth Criminal Court of Pichincha, in November 2013.

Araujo kept custody for six months and in April 2011 the Fourth Criminal Court of Pichincha ratified his innocence.